I am going to discuss two films that have stood out to me recently, particularly in the context of relating objects to place and self. These films are ‘Memento’ (2000) directed by Christopher Nolan, and ‘The Bone Collector’ (1999) directed by Phillip Noyce, both of which put a strong emphasis on objects as being central to the plot and to their character motivations. What has interested me most about these films, is how the objects also allow for the viewer to share an experience with ‘the other’, and how they become integral ‘performers’ themselves on screen – most prominently when relating to the vulnerable states experienced by the protagonists. In the case of Leonard Shelby (Guy Pearce) in Memento, his short-term memory loss condition creates a world where concepts of time become irrelevant, and the back tracking of Leonard’s timeline throughout the film forces us to take things at face value, as he must from the beginning. For Lincoln Rhyme (Denzel Washington) in ‘The Bone Collector’, his quadriplegic state creates a physical barrier. This causes him to rely on the young policewoman Amelia Donaghy (Angeline Jolie) to be his senses on the scene and to feed back the evidence she collects for forensic analysis. In both cases, objects possess vital agencies of their own that the protagonists rely on to reconstruct and navigate their worlds.

Leonard is introduced to us as having an obsessive approach to cataloging objects to achieve his goals, and to ensure that he always has complete control over his actions.

Artifacts, like his collection of Polaroids referring to individuals and events, become the tools to concretise his world and link events together from the instant he forgets. The film starts with these premises, these rules and restrictions that Leonard lives with on his mission to find the man who raped and murdered his wife. Scenes unravel like a ball of string as events become known as either true facts, or lost and disjointed when we realise that Leonard’s seemingly fool proof method is more prone to personal error than we would have first perceived. We can sympathise with his vulnerability in these moments. The objects he collects and curates remain unchanged, yet we observe how the people who he connects himself to via these mementos are more than capable of deception and corruption. In this sense, the objects themselves seem to take the place of these actors as protagonists of the film. As viewers we begin to rely as heavily on their stable presence as much as Leonard does, and this experience is exemplified by the decision to run the film backwards and trace the formation of these collections. In this particular scene, we follow Leonard to a motel bathroom, where he ponders the significance of holding a half empty wine bottle in his hand. 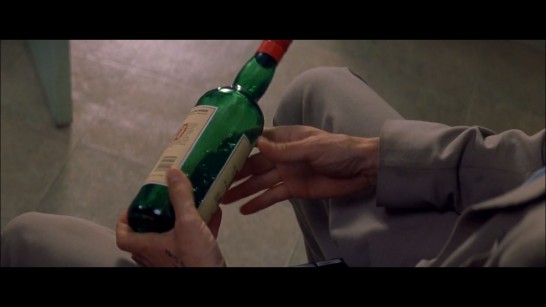 A few minutes later, and we are taken back to give the run-down of the origins of this disjointed scene. Events repeat themselves throughout and we observe Leonard physically take the bottle from the bedside cabinet in the other room, owing to him being pursued:

From an ontological perspective, we are fed information of Leonard’s presence and motivations (however fleeting they may be) in these spaces via these kind of objects. It lends itself to similar practices conducted in forensics, as if we are witnessing the build up of evidence for Leonard’s case told through the narratives of these items and how they link to each other. As if playing out an extended performance of crime scene investigation, we are intrigued by questions of their narratives in time with Leonard on the sudden loss of his memory – ‘how did this get here?’, ‘why would I use it?’, ‘where was it previously?’. A sense of otherness is built up here in relation to the otherly presence of these objects, as well as the unusual state of seeing Leonard ‘othering’ himself as if he were a different person in every iteration of his memory loss. This is emphasised in the scene in which he attempts to create a re-enactment of the scenario in which his wife was killed (as dictated by his meticulous case-file notes) with the help of an escort.

He requests that she plays along with his unusual scheme in a kind of performative role-play:

“First, I need you to put these things around the room…Just pretend that these are your things and this is your bedroom.”

Writing on her artistic research project ‘Dear Ruth’ (2009), Shana MacDonald discusses the significance of performative reconstructions of dwelling through the narratives of found objects. The project, conducted with artist researcher Angela Joosse, was part of the larger scale work ‘The Leona Drive Project’, which aimed to highlight the impact of the demolition of the suburb in Toronto. Through investigation and speculation of the personal histories of the items found in the household of former resident Ruth Gillespie, an archival installation of “the banality of everyday life and its objects”¹ was created. The project acknowledges the subjective interpretations of the performative researcher in re imagining these lived spaces, owing to the fragmented histories the objects create. In one particular instance of the installation, MacDonald notes a performance in which her and Joosse “remake several recipes that Ruth highlighted through handwritten notes in her recipe books as ‘good’.”¹ which were disjointed as projected images onto the lines and curves of stacked dishes. What stands out in these performative engagements, I think, is the self-consciousness you conduct as an actor involved in a network of these objects. You may find yourself coming across such reinterpretations of objects as if seeing them for the first time (literally so in the case of Leonard). Yet, like him reeling through his collections, you cannot take a completely neutral position as an interpreter. MacDonald frames her explorations in this performance based practice as generating questions about lived experience and bringing undervalued histories to the forefront in relation to urban space: “who can speak here? How are their stories conditioned by the structures and limitations of the space?”¹ 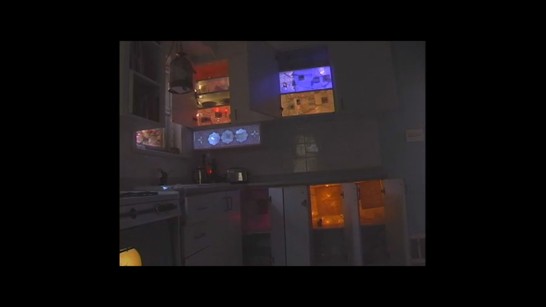 On the subject of interpreting collections, ‘The Bone Collector’ (1999) plays on further cases of vulnerabilities faced by the protagonists – Rhyme due to his physical condition and Donaghy’s reluctance to enter the more gruesome side of police work owing to her witnessing her father’s suicide. Similar to ‘Memento’, objects become vital actors in relation to their interpreters, and provide a portal for Rhyme to be ‘present’ in the case, such as in the scene where Donaghy photographs the evidence placed on the railway line.

Rhyme’s perceptions of space, location and event are formulated through these collections from the confines of his apartment. He analyses what he takes to be true from the perspective of Donaghy and translates the objects through the evidence that links them together, and from the visual aid of his voice recognition system. Forensics offers an intriguing angle into the exploration of lived space and experience. On one level, it becomes a practice of disseminating the connections between things and their relevance to particular motivations. In line with technological advances in analysis, objects can reveal many hidden layers for generating a network of associations owing to their makeup, their use, time of application and their user. They become gateways for connecting researchers to the material layers of the environment in which they were found in. Such methods also have the potential to simplify collections in the forms of data analysis, “[producing] simplicity where there was complexity…[confirming] arguments that research is in no sense a ‘neutral’ event”². In any case, remapping of locations and of the actors involved in such assemblages can shift between digital and performative interpretations, where simulations and re-enactments may lose their clarity or become disjointed in the act of interpretation. In such cases, there are high prospects (and potential risks) of creating fictitious understandings of such scenarios.

I'm a designer: I specialise in theatre design, film-making and performance to explore the unusual in the everyday. I'm excited by things that seem out of place, objects that transform and expanding the inclusion of potential users into the design process. I am using this blog to adapt my understanding of a term I use to make sense of my practice - Intervene Here. I have defined this as a method encompassing activities of film, performance and participant interaction. It also appears as a tool kit to equip the designer when delving into the uncomfortable and the unfamiliar. We may tread here to uncover and isolate the rich material potential to be found there. The opportunities for design that can also exist within the singularity of the moment, the impermanent and the impulsive action. View all posts by Intervene_Here