It has nearly been a month since our interactive theatre company, ‘Say it Again Sorry’ performed out latest show: ‘The Importance of Being…Earnest?’ at the Pleasance Theatre, London. This is a show that requires audience members to tread the boards in Oscar Wilde’s classic farcical piece following the absence of the lead role playing Earnest.

As the set designer for the company, I had aimed to bring the same kind of playful and chaotic energy to the objects on stage as the acts descended into disarray – hanging by a thread. All these objects had the potential to be played with, messed with, at the whim of the audience members to whom being on stage can be a daunting experience in a space that had long been perceived as sacred actor territory. 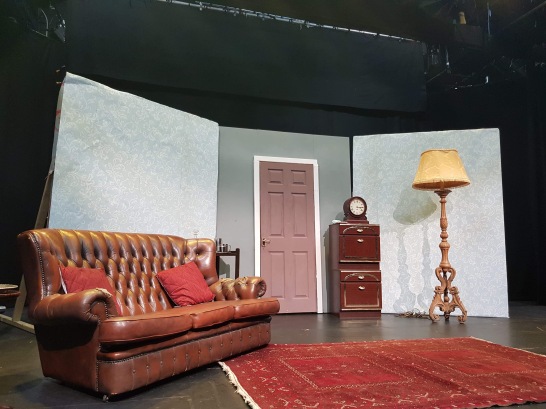 Back in April, I wrote a blog on the company website talking through my fascination with the ‘disobedient object’ – The set for Earnest would be seeped in debauchery. We demanded the audience tear the wallpaper down, be dragged off stage on a grass rug, and get into the grittiness of the actors battling their own demons and shedding their egos.

I viewed this process as ‘theatre about the making of theatre’ – things reveal themselves to be less than what they appeared to be as the world of classical drama begins to break down and show its true colours on stage.

The show culminated in a finale whereby all audience members were asked to get up on stage and celebrate the completion of the production together, amongst the refuse and the debris of a set which had slowly deteriorated and transformed.

I still feel, however, that there was potential for this concept of the disobedient object to be taken much further. In future productions, I am hoping to introduce a simplification for the set, one which avoids the cumbersome difficulties of grand heavy props and stage flats, which were built very last minute outside the Director Simon Paris’ house following the untimely cancellation of our set builder.

In pursuing a performance process that centers around ‘theatre about the making of theatre’, I foresee a potential to have the audience engage more thoroughly with the process of building, dismantling and transforming the stage as the play progresses. The initial process for this work had begun in early conversations between me and Simon about the interactivity of objects, and inspired by Richard Serra’s ‘Verblist’ (1967-68), I scanned the scripts for potential moments of transgressive action and direct manipulations of the objects on stage.

Folding, sawing, planting, building, painting…the stage becoming the canvas for unexpected digressions and activities. Of course, with the restrictions of a one and a half hour show, and considering the world in which we were trying to create, many of these concepts were scaled back and re-defined in the context of the props that would bridge the gap between the Wildean world and our ethos of audience participation and collaboration.

Future guises of the performance are intended for the festival environment, with a series of runs at the Vaults Festival London, Brighton Fringe and the Edinburgh Fringe. This will see a dramatic change in how the set and props will function and be transported between the spaces. We learnt much from our experience taking Earnest to Nozstock Festival this year. 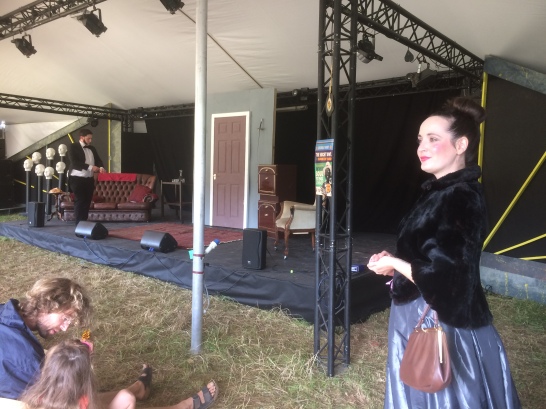 It was elaborate, but grossly over sized for the festival, being as it was more suited to the traditional stage space of the Pleasance Theatre in London. Once again the show was a chaotic success with the crowd, but it revealed much about the designer’s role of responsibility for the things they design, and how they live on beyond the performance.

A current field of study concerned with this is Ecoscenography. Largely the development and practice of performance designer Dr. Tanja Beer, Ecoscenography interrogates common unsustainable approaches to performance design by incorporating principles of the ‘ecological worldview’. Essentially, this is moving our human-centric perspective to an ultimately ‘world-centric’ perspective by re-framing our activities as part of the wider network of ecosystems, not as entities to which our environment is at our disposal. Scenography is an incredibly malleable territory for design. Its emphasis on building relationships between architectures, sound, lighting, bodies and objects to build the experience of a world. Ecoscenography stands on making these connections live beyond the life of the stage or the performance duration, recognising that “no decision stands on its own: every choice is intertwined with social, environmental, economic and political consequences that are far reaching and capable of having long term effects.”¹ It is therefore necessary to consider what positive implications the work might have for communities in the design process and the re-usable potential of materials.

What has excited me most about the creation of a set like ‘Earnest’, is this practice is moved directly to the forefront and became the audience’s process. The impact of the performance was felt on stage and beyond having had the audience become active agents in its creation, including through the open rehearsal process.

Following the challenge we faced transporting and reconstructing the set for Nozstock, we were fortunate enough to have the festival organisers offer to take the flats and some of the larger pieces of furniture for use in future productions. This is where the designer’s responsibility for the things we make becomes integral.

I cannot say I had enough foresight when it came to considering how the set would exist beyond these initial preview performances. If it is to exist as a sustainable and playful entity suitable for the festival runs it will endure, its future development demands it revolves around the Ecoscenographic. What is the method? Crowd sourcing props perhaps? designing objects that can be deconstructed and packed away inside a small box…incorporating objects that can be planted or can be worn…

I turn again to Tanja Beer’s work, the project ‘Strung (This is Not Rubbish)’ (2013) which mapped the life cycle of salami netting and tangled it into the performance work which “dissolves boundaries between performer and designer, installation and costume, site and material.”² A set that was “transported in a small suitcase or backpack”³ was given new life as a knitted garment and auctioned off to charity following the performance

For the life of Earnest and the energy it requires of its audience, these ‘disobedient objects’ may be allowed to take many forms throughout the production, being deconstructed and redecorated. It was thrilling to see the audience members tentatively tear down the wallpaper when required, but this is neither cost effective nor sustainable. In a show like this I believe it is the action that counts, the very act of doing. In a inter-connected ecosystem that is the stage space, all these objects can have the potential to do and become something before, during and after the performance. They have the potential to transform the set at every turn as a supposedly classic performance quickly descends into chaos.

³’Ecoscenography: Adventures in a new paradigm for performance making’ https://ecoscenography.com/this-is-not-rubbish/

I'm a designer: I specialise in theatre design, film-making and performance to explore the unusual in the everyday. I'm excited by things that seem out of place, objects that transform and expanding the inclusion of potential users into the design process. I am using this blog to adapt my understanding of a term I use to make sense of my practice - Intervene Here. I have defined this as a method encompassing activities of film, performance and participant interaction. It also appears as a tool kit to equip the designer when delving into the uncomfortable and the unfamiliar. We may tread here to uncover and isolate the rich material potential to be found there. The opportunities for design that can also exist within the singularity of the moment, the impermanent and the impulsive action. View all posts by Intervene_Here